Former Windmill Street School to be Renamed After the Narducci Family

After sitting abandoned for more than a decade, the former Windmill Street School on Paul Street is getting a new look and name. Tonight, the Providence City Council passed a resolution renaming the school, “The Narducci Learning Center.” Refurbishing the 80-year-old school has been a passion project for Councilman Nicholas J. Narducci throughout his 16 years on the City Council. Now, thanks to his tireless work and the efforts of the City Council’s Finance Committee, the school is undergoing a $30.5 million renovation, with plans to re-open in the fall of 2023.

The Narducci family has deep ties to the building and a life-long commitment to the north end and the city of Providence. In fact, the Councilman’s father attended the school in the 1940’s, and his mother and wife, both worked as lunch aides for decades. Councilman Narducci himself was heavily involved with little league, football, and other extracurricular activities for the students and families of the school.

“It means so much to my family, to create a lasting legacy in the neighborhood we love and have belonged to for generations,” said Councilman Narducci. “This beautiful building stands in the middle of Ward 4 and serves as a symbol of the resiliency and spirit of the people here. I would like to thank President John Igliozzi for sponsoring this for my family, and all the co-sponsors. It means a lot to my family, past, and present.” 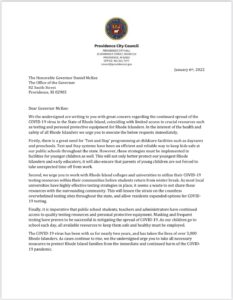 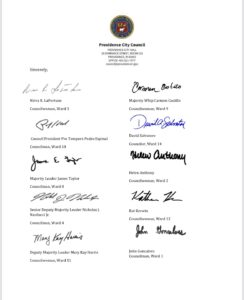 Providence City Council Senior Deputy Majority Leader Nicholas J. Narducci Jr. has announced that Hopkins Park will be dedicated in honor of the late Abelardo “Abe” Hernández in a ceremony this Sunday, October 31st at 1 PM. The park is located on Admiral Street in Providence between Chad Brown Street and Whipple Street.

“It is not often that you come across a man so selfless and dedicated to service as Mr. Hernández was. For decades, he shaped the lives of countless children and families in our city through soccer and afterschool programming. His loss was felt deeply by our community, and I am proud to honor him by dedicating Hopkins Park to his memory,” stated Councilman Narducci.

Abelardo Hernández was born in Guayaquil, Ecuador in 1956 before moving to New York City in 1972. In 1997, Mr. Hernández moved to Providence with his wife and their three children, where they lived until his death on January 30, 2021. A pillar of his community, Mr. Hernández was the President of the Guatemalan Soccer League, the Vice President of the Rhode Island Soccer Association and the Vice President of the Union Deportiva de Rhode Island (UDRI). Additionally, he coached numerous youth sports programs and taught afterschool activities at William D’Abate Elementary School.

“A tireless advocate for youth programming, Abelardo Hernández did everything he could to ensure children in his community were given the opportunity to enjoy all the benefits of youth sports. Hopkins Park is a place where children and families can spend quality time enjoying physical activities, nature and creating life-long memories; it is the perfect place to honor Mr. Hernández’s legacy,” added the councilman.

Councilman Narducci is a member of the Board of Parks Commissioners. On Sunday he will be joined by the Hernández family, and members of the City Council. The park was once connected to the Esek Hopkins homestead, containing a playground and adjacent soccer field which is also dedicated to Mr. Hernández. A sign will be up at the park commemorating Mr. Hernández, which will be replaced by a permanent stone memorial in the coming months.

“I was pleased to learn that a contract was awarded by the Board of Contract and Supply to begin design and construction at the Windmill Street School. I look forward to seeing the Bacon Construction Co. Inc. revitalize the property and bring the school back to a functioning capacity.

“Ten years ago, the Providence Public School District decided to close Windmill Street Elementary School and no longer use it for classroom space. Since that time, I have advocated for this landmark neighborhood building to be revitalized. Unfortunately, for too long, the school has instead sat vacant, becoming a safety hazard due to repeated vandalism, and more recently, a fire which damaged a third-floor classroom in September. The City Council’s Finance Committee allocated $30.5 million towards the repair and renovation of this school in 2020 in an effort to renew the property and address some of the long-term classroom space and capacity issues facing the Providence Public School District.

“I am thrilled that the Windmill Street school will no longer be a threat to public safety and will finally return to its original purpose as a place for Providence youth to learn, grow, make friends and build futures. I hope that we can continue this momentum as we work together to improve schools across our city.”

This evening, the Providence City Council voted unanimously to approve a Providence Home Rule Charter Section 403 resolution to bring charges against City Clerk Shawn Selleck, and to seek his suspension or removal from office. The resolution charges Mr. Selleck with the following:

· Violations of the City Code of Conduct

· Creation of a Toxic Work Environment

Pursuant to Section 403, these charges will be presented in writing to the Mayor and Mr. Selleck, and after a 30-day period, the Council will call a public hearing to weigh the charges and vote on the suspension or removal of the City Clerk (two-thirds vote of the Council required).

The following statement was offered by Providence City Councilman Nicholas Narducci Jr. (Ward 4) regarding the cleanup of a homeless encampment area that has developed under the Route 146 overpass on Branch Avenue.

“Earlier today I participated in the cleanup of an area under and around the Route 146 overpass on Branch Avenue. The area was cleaned up in coordination with the Department of Public Works after many complaints from neighbors about trash and litter. Police were there for traffic safety and did not approach anyone. I also want to make very clear that no homeless who use this space for shelter were displaced and that I am continuing to work to ensure that these individuals have access to social support services.”