The City Council Committee on Ordinances will tonight receive a final report from the Community Safety Act Working Group, a panel established by the Council in April tasked with resolving outstanding concerns about the proposed landmark ordinance that seeks to improve police and community relations by adopting best practices from around the country. The working group was comprised of community members, police administration and union representatives, and City solicitor, administration, and City Council representatives.

The working group’s recommendations include greater clarification of definitions used in the ordinance, improved language that eliminates confusion about intent, and language changes that ensure consistency between the ordinance and State law. The working group has also proposed changing the ordinance’s title to the Providence Community-Police Relations Act (PCPRA) to better demonstrate its intent.

“The working group was constructive in making necessary changes and modifications with the original version. It also presented an opportunity to make clarifications on some of the language to resolve issues,” said Providence Police Chief Col. Hugh Clements. “I stand in support of this current version.”

“The working group has done an outstanding job in working through some of the former concerns about the ordinance and coming up with alternatives that we can feel confident about,” said Councilwoman Mary Kay Harris (Ward 11), who served as a member of the working group.

“This process brought everyone together to participate in the discussion, which was beneficial for the act itself and to achieve its objective,” said Councilman Terrence Hassett (Ward 12), who chairs the Council’s Ordinance Committee and served as a member of the working group.

“This is an important piece of legislation, and the additional deliberation was time well spent,” said Majority Whip Jo-Ann Ryan (Ward 5). “I commend the working group for their diligence and working together to address unresolved issues.”

In its final form, the bill is the product of nearly three years of stakeholder engagement. Among its many provisions, the ordinance effectively prohibits racial and other forms of discriminatory profiling, mandates policies for the use of body cameras, brings much-needed reforms to the Providence Police Department’s “gang database,” and codifies policies regarding non-criminal immigration concerns.

Councilors are expected to take a final vote on the proposed legislation at the City Council meeting on Thursday, June 1st at 7:00 pm. 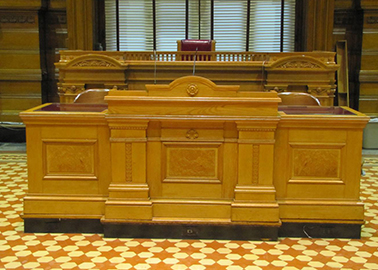 A majority of City Councilors today called for a Special Meeting of the Providence City Council to be held on Monday, May 22nd at 5:00 PM in the City Council Chamber. The purpose of the meeting is to change the City Council Rules to allow for the removal of the Council President. If adopted, the new rule will read as follows:

Additionally, the meeting will declare a vacancy of the Ward 3 Council seat so that a date can be set for a Ward 3 special election.

“After much deliberation, I have determined that it is in the best interest of my constituents, colleagues, and city to formally submit my resignation as Providence City Council President.

Serving the people of Providence is one of the greatest honors of my lifetime, and I remain committed to representing my constituents in my capacity as Councilman. While it has been a privilege to serve my colleagues as Council President, I believe this is the appropriate time to step down from my leadership position and focus on the best opportunities to serve the needs of my community.

I understand that some of my Council colleagues wish to amend the Council Rules to allow for the removal of a Council President at any time. I urge my colleagues to take a more measured approach, and refrain from rushing into a reactive rules change that undermines our democratic principles.

In recent weeks, I have been fortunate to receive an outpouring of support from my constituents. At this time, I’d like to offer my deepest gratitude for all their well-wishes and support throughout this process.”

The Providence City Council will tonight consider first passage of an ordinance that establishes a permanent Equal Pay Task Force to promote equal pay for equal work in the City of Providence. The seven-member panel would study best practices from other municipalities, collect and analyze data from City departments and contractors, and advise the City Council and Mayor on policy and legislation recommendations that address wage disparities.

“As elected officials, we must ensure that the City of Providence and its vendors are treating employees equally and compensating them fairly,” said Councilman David Salvatore (Ward 14), who introduced and sponsored the ordinance.  “The wage gap in America is unacceptable, and government at every level must be proactive and intentional in promoting equal pay for equal work.”

According to the Economic Policy Institute’s State of Working America Data Library, women who worked full-time and year-round in 2016 earned 20% less than their male counterparts. Salvatore is hopeful that Providence will become a leader in closing that gap: “The City of Providence should model the highest standards of wage equality. The Equal Pay Task Force will study what’s working in other cities across the country and guide us toward best practices.”

The ordinance requires a seven-member task force comprised of the Chair and Vice Chair of the Providence Human Relations Commission, an attorney from the City Solicitor’s office, two members appointed by the City Council, and two members appointed by the Mayor. The panel would be required to annually submit a report of its activities, findings, and recommendations to the Providence Human Relations Commission, City Council, and Mayor. The first report would be due by December 31, 2017.

The ordinance has been vetted by the Council’s Ordinance Committee and will appear before the full City Council at tonight’s meeting. All city ordinances require two passages from the City Council prior to becoming law.

12 Councilors Approve Vote of ‘No Confidence,’ Call for Resignation of Council President Aponte