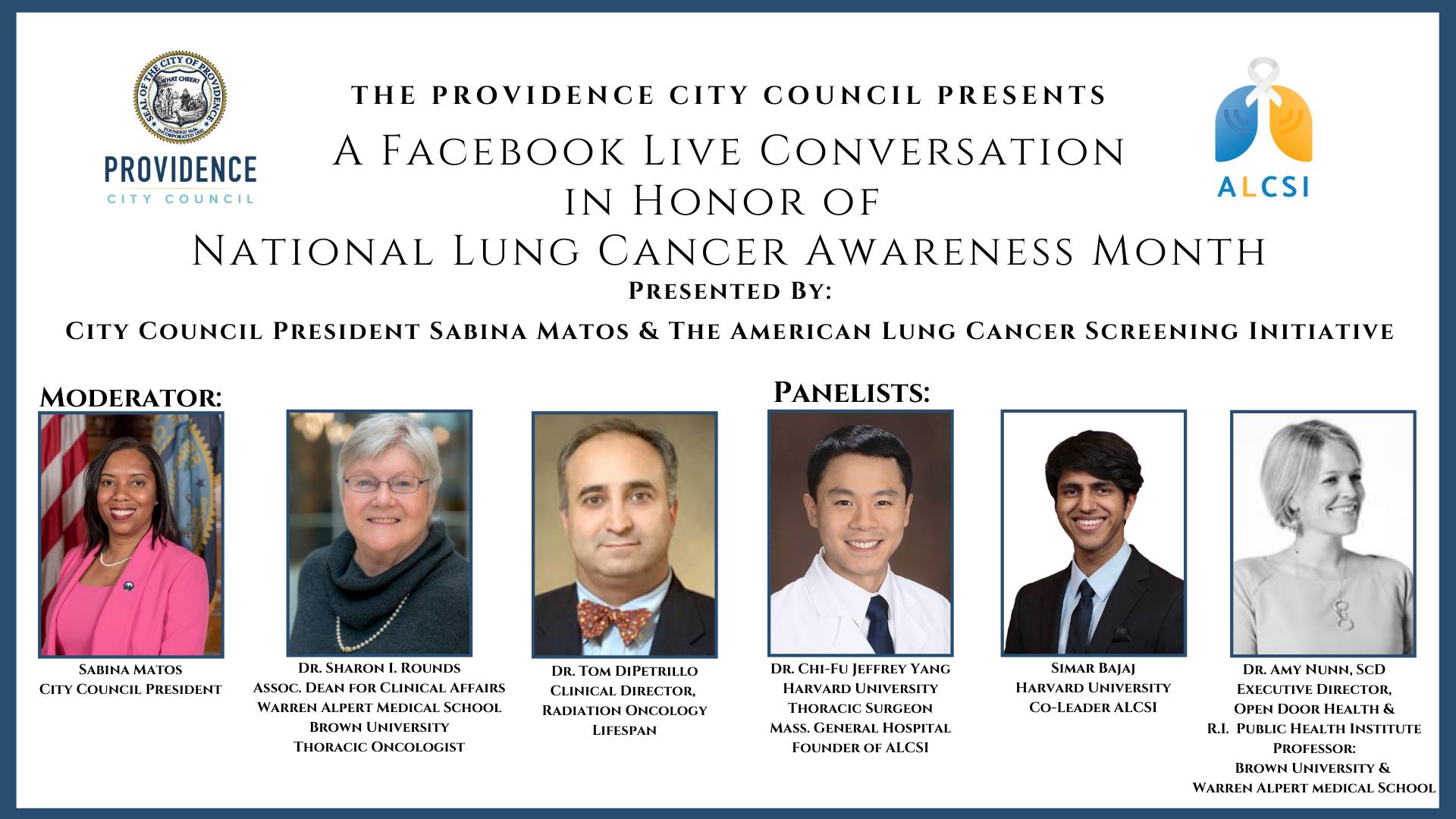 We will be joined by Dr. Sharon I. Rounds, Dr. Tom DiPetrillo, Simar Bajaj, and Dr. Amy Nunn to hold a community conversation to discuss the barriers and issues surrounding screening and treatment for lung cancer.

If you have questions, please put them in the comments and we will address them in the Facebook Live conversation.

Dr. Chi-Fu Jeffrey Yang is a thoracic surgeon at Massachusetts General Hospital and a member of the faculty at Harvard Medical School. He received his medical degree at Harvard Medical School after completing a Fulbright Fellowship and a Howard Hughes Medical Research Fellowship. He completed his general surgery residency at Duke University Medical Center and cardiothoracic surgery fellowship at Stanford Hospital. Dr. Yang has received numerous awards, including recognition for exceptional accomplishment in both clinical care of patients and in the teaching of medical students. He has been the lead investigator on several high impact studies of lung cancer published in the Journal of Clinical Oncology, Annals of Surgery, and Chest. He has written over 80 publications, including over 50 as first- or co-first author. Dr. Yang is a member of the editorial board of the Journal of Thoracic and Cardiovascular Surgery. He also focuses on raising awareness of lung cancer screening through the American Lung Cancer Screening Initiative, a 501(c)(3) non-profit he co-founded.

Thomas DiPetrillo, MD, is the clinical director of radiation oncology at Rhode Island and The Miriam hospitals. He is a leading authority on a variety of radiation treatments for cancer, including intensity modulated radiation therapy (IMRT) and high dose rate (HDR) brachytherapy. DiPetrillo is a pioneer in the use of IMRT, a noninvasive procedure that allows physicians to pinpoint the delivery of radiation therapy, resulting in better tumor control with less toxicity. He is also an expert in the use of HDR brachytherapy, a treatment that involves the use of a robotic arm to deliver a radioactive “seed” to a tumor.

Simar Bajaj is a first-year at Harvard College, concentrating in the History of Science with a secondary in Global Health & Health Policy. Simar is dedicated to the cause of medical education, founding the Doctor in Progress website and That Medic Podcast to spread health literacy among his communities. With an additional interest in health policy, Simar serves as an editor for the Harvard Health Policy Review and a member of the Institute of Politics Health Policy team. A co-leader of the American Lung Cancer Screening Initiative, Simar has worked with the Congressional Lung Cancer Caucus and Senate Committee on Health, Education, Labor, and Pensions to introduce lung cancer legislation into Congress. Given that policy and research go hand-in-hand, Simar also conducts cardiothoracic surgery research with Stanford University and Massachusetts General Hospital.

Dr. Amy Nunn is a Professor of Behavioral and Social Sciences at the Brown University School of Public Health. She holds a secondary appointment in the Division of Infectious Diseases at Brown University Medical School. She is also the Executive Director of both Open Door Health in Providence and the Rhode Island Public Health Institute (RIPHI). Dr. Nunn conducts applied research on how to reduce racial and ethnic disparities in HIV infection, treatment, and care. With colleagues, she oversees two pre-exposure prophylaxis (PrEP) implementation science programs in Providence, Rhode Island, and Jackson, Mississippi. She also conducts HIV and Hepatitis C (HCV) prevention research about how to best link people living with HCV and HIV to medical care.